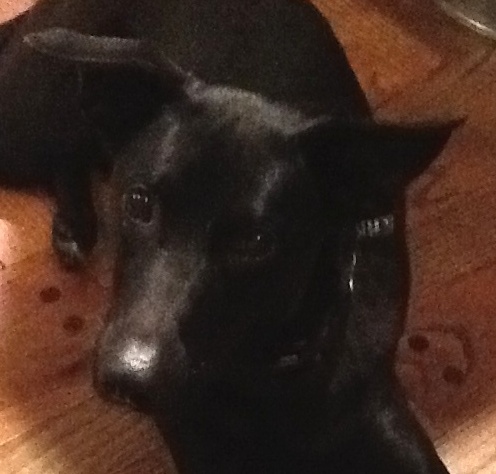 ADOPTED 03-17-14- FOSTER UPDATE#2: Liquorice has recently figured out that she’s a Labrador Retriever. She loves to carry objects around in her mouth or bring them from room to room or outside with her – shoes, toys, bones, bags, whatever she can find.  Whenever she does this she seems very proud of herself, and prances around, wagging her tail, and showing her prizes to the other dogs. She’s beginning to fetch, as well.  She doesn’t mind when I take items out of her mouth.  She loves her toys, and plays with them happily on her own or with me.  She reminds me of my Golden Retriever when he was her age.

When you view Liquorices’ videos or photos, please bear in mind that black dogs don’t tend to photograph well.  She is a very pretty dog in “real life.”  She has shiny black fur with a chocolate brown undercoat, subtle white markings on her chest and around the edges of her back paws, soulful brown eyes, and the most expressive ears I’ve ever seen. They stand straight up when she’s alert and focused, out to the side when she’s perplexed, and hang down when she’s relaxed.  She tends to be initially timid around unfamiliar visitors, but warms up given a few minutes time(especially if she’s tempted by treats).  Once she’s comfortable, she’s her “normal” self (outgoing and up for anything).

RESCUE HISTORY: On May 15, 2013 Liquorice and Maggie were captured by animal control in LA, they were just babies at 12 weeks old. They escaped death when a southern volunteer from the Winnsboro Animal Shelter saw them and took them into their shelter. The Shelter has 28 pens and all of them are full but they could not turn away from these babies.

WAS contacted Rescue Dog Village Guardian, Inc. to assist them because they saw right away that they were special sweet dogs; we were honored to help and be part of their rescue story.  How a dog could endure so much heartache and still remain so capable of love is an incredible accomplishment and amazing feat, especially because Liquorice was clearly heartbroken. She showed it on her face and in her anxious glances to the animal control officer that captured both of them.

It was painful for the volunteers at the Animal Shelter to watch these magnificent baby puppies that clearly were consumed with confusion. How a person just “DUMPS and DISCARDS” a perfectly healthy and marvelous baby puppy that is only guilty of being born to a mother dog that was not spayed by her owner. It was clearly “more convenient” for the owner to dump them in the woods where they would have to make it in the world on their own. It is common for an owner that has a dog with puppies to take them far from home and unload them out of their car. We don’t know if there were other brothers and sisters that were with them and didn’t make it in a forest where baby animals are easy prey for larger animals. Not to mention the bad weather and hunger in their bellies that they had to endure. They had no hunting skills so we can only imagine how painful and scary it was for them.

Liquorice is now 8 months old, weights 55 lbs, however sadly, she has been cooped up in a tiny cage for over 5 months. As bad as that sounds, it is a much better fate then to be euthanized by the City—all she needs is a family to run and love her. The wonderful volunteers at the shelter come daily to exercise and socialize Liquorice, which helps calm her down. Some of them drive 45 minutes one way and the gas to get there is from their own pocket—they are true heroes. She is in excellent health because of the efforts and love she gets from the volunteers at WAS. When she arrived, she only needed the basic vaccinations and deworming.

What the volunteers do say about Liquorice is that she is a terrific family dog. She is still very young and will need vigorous exercise, swimming and fetching on a regular basis for the early years of her life. She is not the kind of dog that you can just take a walk around the block once a day. As she gets older, that will change; this is true of most puppies.

Liquorice is one of the best dogs for children of all ages becuase she is kind, good-natured, and takes most things in stride. She needs some training in her manors, but that is true of most dogs and especially young puppies.  She interacts well with children as long as your children are taught to interact well with her. She has never shown aggression, is very friendly with everyone, is eager to please and responds to all that she is asked to do. True to the breed, she will mature slowly and will remain a spirited teenager for a few years.

Liquorice has a cheerful, kind-hearted, tail-wagging nature; she would thrive on exercise and athletic activities, in addition, she is steady-tempered and dependable with everyone and is calm with other animals. She would do well with a family, a hunter, fisherman, runner, bicyclist, camper, hiker—in other words, outdoor people or activities. She doesn’t have to have a family that is outdoors all the time, she is the kind of dog that would do well with that type of family. We don’t know how she is with cats but we just can’t image that she would have any problem with them because of her sweet temperament.

Of all of the dogs that a family is considering, Liquorice ranks at the top of the list as “the best” for a family pet. She loves everyone, human and canine; she is very loyal, and will protect you and your children faithfully.  She learns and listens well. If you treat her well, she will be the best pet you’ve ever had. RDV is committed to Liquorice and want to make sure that we find her the perfect forever home where she’ll be cherished as she always should have been

DISCLAIMER: THE BREED POSTED ON OUR DOGS’ BIOGRAPHIES ARE OUR BEST GUESS BASED ON SEVERAL YEARS OF DOG RESCUE. ADOPTERS WHO NEED TO KNOW THE EXACT BREED OF A PARTICULAR DOG MUST HAVE THE DOG TESTED AT THEIR OWN EXPENSE.

See how shiny her coat is, photos just don’t do her justice.

FOSTER UPDATE#1: Our foster gave us this wonderful update and insight into sweet Liquorice:  Liquorice is in motion a lot because she is so happy, “it’s almost impossible to take a good picture of her.  She wags her tail with so much excitement that she almost falls over”!

Liquorices’ mom “would love to see her placed in a family with children – she’s the perfect family dog.  She has no issues whatsoever other than being atypically energetic pup who wants to play and be included in everything. She jumps near me, but not on me.  She’s very comfortable using a crate. She chases the cat, but not in an aggressive way, just a playful way.  My golden retriever adores her.  My Nova Scotia duck tolling retriever is not a fan because she tends to get in his (and everyone’s) personal space which makes him very cross.  We’re working on that”.

She seems to know “her “heel” and “sit” commands quite well.  She’s had no accidents yet (thanks to crate training).  I praise her every time she relieves herself outside. She’s bright, alert, and very eager to learn, and please.  She loves treats. Occasionally she pulls back from entering an unfamiliar space, but works through it without much fuss.  She was wary of stairs at first, but now races up and down them like a champ (and my stairs are VERY steep).  I’ve had great success using a “gentle leader” harness and leash with her during walks/runs.  She’s slipped out of her gentle leader and regular collar twice, and never made a move to run off.  She likes to be with mean follows me around the house.  She sighs dramatically when I rub her ears.  She also seems to like to watch TV with her legs crossed. ”

Liquorices’ pictures don’t  do her justice.  I was surprised by how small she is in real life.  There’s also daintiness other – unlike a boxy lab.  Her face has a foxy look to it, at times.  She’s really a beautiful pup. What can I say?  She’s a character.  If you’re looking for a dog that will keep you entertained, Liquorice is your girl!

She is so proud of the ball, we are sure it is the first time she ever had one.