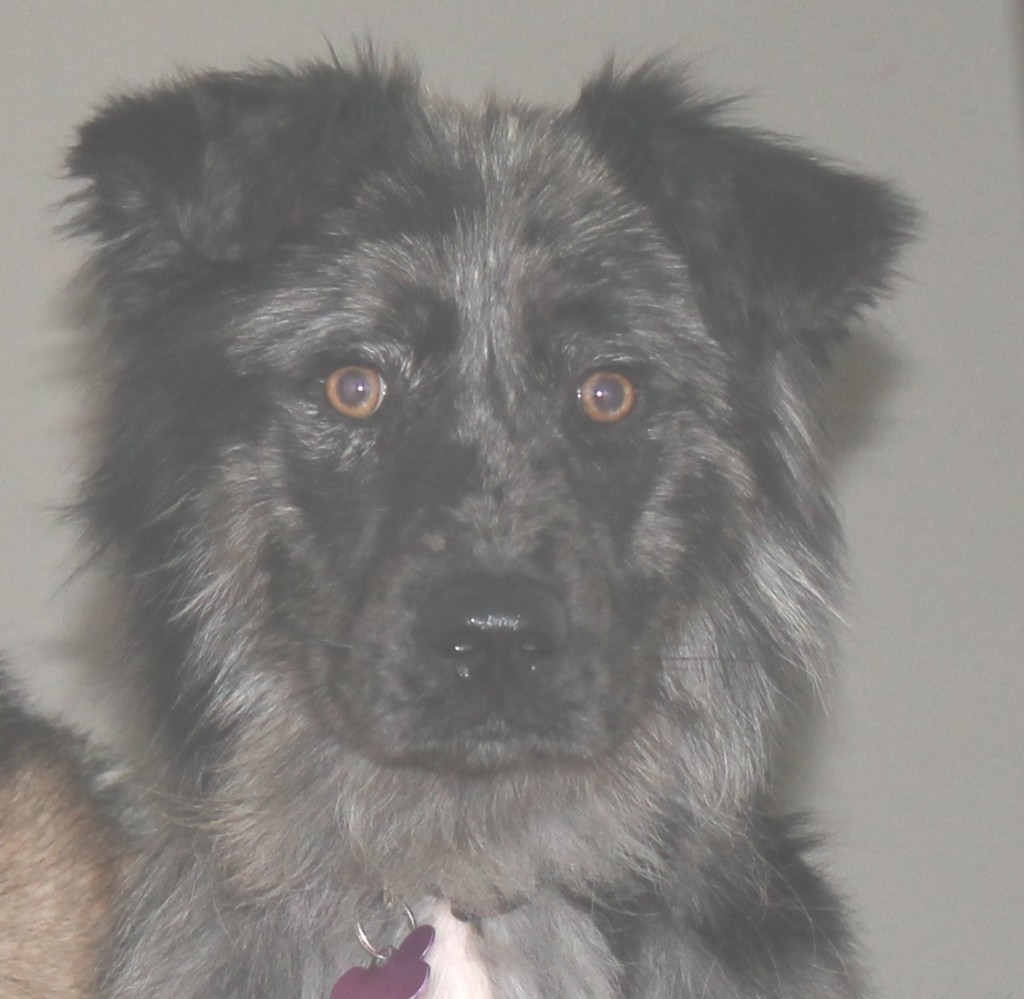 ADOPTED 09-12-12 – The first day Marcel arrived in CT he was a little shy but began warming up to his foster family and the dogs in the house.  He enjoyed spending time outside and with his favorite ball. Marcel is an Australian Shepherd Mix with perhaps a little border collie in him as well. He has a striking appearance with black and grey colorings and markings.  He has the most gorgeous brown eyes that will melt your heart.  He is approximately 9-10 months old and active not to be confused with hyper.  He likes to play, run, fetch, swim and spend time outside.

Marcel is truly an extraordinary guy. Everyone who meets Marcel seems to understand just how special he is. Below are 5 videos of him so you can see how handsome he is.

Getting the ball ♥♥♥♥  Playing with his foster brother

Playing and running at his foster home

Marcel was rescued from a shelter in LA and has had a long road in foster care due to heartworm treatment, which we are happy to say he is heartworm free and very healthy!  His foster home down south did an amazing job making sure that he received the best care and treatment and he is just wonderful!  He is currently on heartworm and flea and tick prevention medication.

Marcel is very active. He enjoys spending time outside playing fetch. He loves to swim in either pools or lakes.  If he doesn’t receive the appropriate amount of exercise he can become bored and will look for things that could become mischievous. He likes to chew but has only had one issue since he has been in my home after a rainy miserable day where he could not get his exercise in.  Since then we play fetch in the house or work on basic commands.

Marcel LOVES other dogs; he is currently in a foster home with 3 dogs of various sizes and gets along great with them. He likes to run around and play with them.  He will often watch them before getting involved in the action.  He is not dominant by any means but don’t get me wrong he is not submissive either. The only issue I have noticed is with a 150 pound St. Bernard who Marcel was not a fan of and began barking at, other than that he has been fine.

I am not sure how he is with cats. I can say that he is not a fan of chickens as he enjoys running up to my chicken coop whenever he has the chance and barks at them this could be a bit of the shepherd coming out in him.  He also has met a goat that he was not overly interested in and began barking at him as well.

As for people he has a tendency to melt the hearts of anyone that he meets.  He is initially shy to some depending on the situation but will warm up and loves to be petted and have attention paid to him. Marcel is such a lovable pup.  He loves spending time with my 12 year old son and has taken to playing with him.  He is affectionate and loving with children although he has not had much contact with children under 6.  He is gentle and loves hugs.  Marcel is currently eating Pure Vita Grain Free Bison Dog Food.  He loves to eat and does not have any signs of food aggression.

He is good in the car, although he is not always a fan of getting in the car at first but settles right in. Marcel is not a fan of getting into his crate and requires some prompting to go into it but once in will adjust and remain quiet.  He has slept in the crate overnight which I would recommend if there are days that he does not get enough exercise because he will chew things when bored.

We just had our first thunderstorm since coming here and he did fine he actually slept next to me appearing unphased by it.  He is working on his leash skills and is responding well this will need to be continued.

Marcel is crate trained and spends time in his crate when no one is home.  He usually sleeps with my son on his bed and other times will go into his crate for the night without a problem.  He sleeps through the night without any problems. He is housetrained and has not had any accidents. He will go to the door when he wants to go outside. He likes to lie on the floor but has been allowed to lie on my couches.

Marcel is an amazing dog who just wants to be able to love someone and be loved.  He has a favorite ball that he will walk around with and give you the look that it is time to play.  He will chase the ball and bring it back and is so gentle it’s almost too easy to play with him.  His beauty is striking and he is one of those dogs that become love at first site.  I brought him to the groomers today and they just fell in love with him, so much that they began looking for potential adopters for him.  There is something about him once you meet him that grabs a hold of your heart.  Marcel is loyal and enjoys learning new things.  I just don’t think writing about him can do him justice.

The perfect home for Marcel would be one in which he is going to be in the center of it.  It would be ideal for him to be in a home in which he will be an active part of their life.  He needs to be in a home with a nice size yard where he has the opportunity to play and run. Just going for walks won’t be enough for him.  He would love to go on runs, hikes and swim.  I often picture him as one of the dogs you would see kayaking with someone.  He would do well in a home with another dogs but that is not a must. Ideally, it would be great if he was not in a crate for long hours. Most importantly he needs to be with a family that has the time to spend with him and I promise he will be all that you asked for in a dog.

My favorite things to do are play fetch and go swimming in a pool or pond because I am a very active dog, my breed is used for herding so we are used to getting lots of exercise. I am a very smart boy who knows sit, down, and stay and can learn a lot more if you’re willing to teach me new things. I love playing with my doggie friends and love getting pet even more. I ride well in the car, and don’t mind the crate at all. I a sensitive to correction being the gentle boy I am and need someone who has a gentle approach to discipline. I have long hair so daily brushing is needed so i don’t get painful mats in my fur. My perfect home is one with a big yard for me to run in with another dog to play with so I have someone to expel my energy with and people who are active and will give me the exercise and love I need. Are you the right home for me?