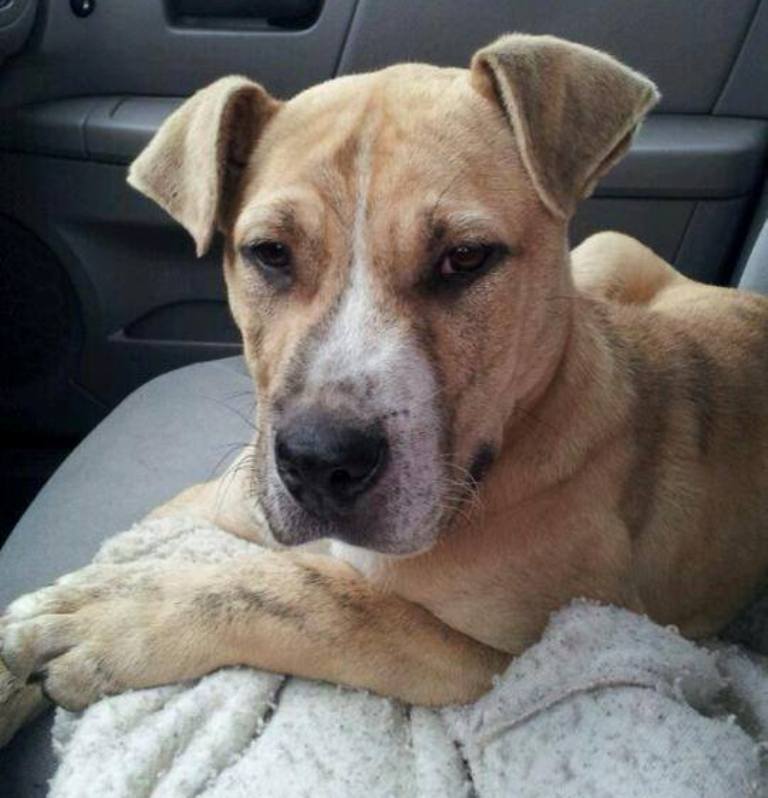 ADOPTED ON 05-21-14 – Clay is so sweet and tidy he doesn’t need a crate. He has never chewed anything and has never made a mess if any kind. Good boy:))) Clay was captured by animal control on February 3, 2014. He was bleeding and completely covered with mud. When the volunteer at Winnsboro Dog Pound washed him off, he could see that Clay had multiple bite wounds all over his body. He had punctures, tears, and several very deep holes, some of which “tunneled” under the skin. The infection was so bad that the vet had thought it might be better for him to put him down, but decided to treat him and see how he responded the next morning.

A month of daily doctoring and antibiotics and Clay’s willingness to live, he got better. He spent a week at the Vet’s office, receiving daily hydrotherapy and wound care. Now there are only has a few physical scars left from the terrible trauma. His medical expenses were over and above any of the other dogs; he was taken into foster care so that the foster could continue his wound care. Every day the foster lovely scrubbed every sore so that the wounds could heal from the inside, out.

Clays endured this painful treatment with licks of thanks, he had to endure a long tube of antibiotic cream inserted into every puncture for as far as it would go. Even through this worst part of the doctoring process, he was a trooper barely even wincing in pain; he was a very good patient! As with most of the dogs that are rescued, we are not sure what happened to cause his injuries, however, we are very thankful he made it!

Clay is now strong enough and was given all his vaccinations; he was neutered on February 19, 2014. He’s a very easy-going guy and his mom describes him as a very refreshing fella. He comes when called, every time! He enjoys affection, but isn’t overbearing about getting it. He doesn’t jump or chew up things. He follows his mom to his pen to be put to bed when it’s time. He has no bad habits, gets along perfectly with the other dogs, even around food. His foster mom took him to the nursing home, and he wasn’t “spooked” by the wheel chairs. Even though he is large, he was the perfect gentleman around the elderly residents. His mom owns cattle and she started him working cattle, he is a very well-mannered dog.

Clay’s energy is low to medium; he is not a hyper dog. He does enjoy running and playing, and enjoys the other dogs, but he isn’t one who requires high activity every day. When he is around other dogs, his demeanor is more submissive, even with his foster sister Marley who is a little bossy. Marley weighs 19 pounds, he is 63 pounds and she bosses him around. Mom’s thinks that it is his submission that got him eaten alive because he is not the kind to fight back.

When he is around children, he has done great around mom’s 5 year old granddaughter and around the 80 year old nursing home residents! He has an amusing, entertaining personality and most people who have owned a Cur dog say that they would never have another breed. He has a sweet and gentle approach when he is around children, elderly and other dogs. He is very obedient, loyal, loving, and affectionate, which makes him an excellent family pet, and companion.

Clay also has a sweet outgoing nature and does well with lots of love attention and playing the role of guardian. He is very intelligent and generally easy to train and responds well to basic training and commands. He has the ability to learn to perform most any task if someone is willing to take the time to teach him. He is also very obedient, loyal, loving, and very affectionate. He enjoys spending time outdoors, playing fetch, and having plenty of room to run and play.

DISCLAIMER: THE BREED POSTED ON OUR DOGS’ BIOGRAPHIES ARE OUR BEST GUESS BASED ON SEVERAL YEARS OF DOG RESCUE. ADOPTERS WHO NEED TO KNOW THE EXACT BREED OF A PARTICULAR DOG MUST HAVE THE DOG TESTED AT THEIR OWN EXPENSE.

Here is a short video of Clay – see how sweet and easy going he is.