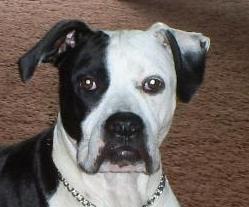 ADOPTED 11-20-11 – NOAH’S STORY: Noah story starts when he was found in NYC in February 2011. He was starving, had pneumonia and a case of Giardia. He was rescued and nursed back to health by the SPCA and he was adopted by an Angel. His story to his forever home does not stop there because his adopter loves him very much and wants what is best for him; she surrendered him to Rescue Dog Village Guardian, Inc.. After she adopted Noah, her work schedule changed and she soon realized that she won’t have the time to give Noah the attention and playtime that he deserves, he is alone for long hours now. She feels that he deserve a home with a nice yard and maybe a doggie friend to play with so that he is not alone so much.

Noah has a lot of energy, but he really only uses it to play, once inside, he settles down nicely. He is very well behaved at home, and exceptionally well behaved at feeding time. Noah’s mom did all the right things for him, she took him to puppy obedience classes, so he known’s how to sit and lie down on command. He is housebroken, and will let you know when he has to go out.

Noah is a very happy boy and likes almost everyone. He can be shy when first meeting people, but once he sniffs the person and feels comfortable he is very friendly.  He must have been abused by a male because he is skittish around large men, however, he loves other dogs, is very good with cats. He loves to run and play, and is happiest around other dogs. He loves snacks, especially baby carrots.

Daily exercise is best for Noah. A fenced yard with another dog is preferred but as long as someone is home a lot and sees that he gets lots of exercise and socialization with other dogs, he would be happy.  He plays very well with other dogs and does well with cats. He is a very healthy boy who loves to ride in the car. He does well in a crate and walks well on a leash.

Noah is great around children; he was exposed to a 7 year old and a 10 year old and was fine with both.  This shows us that he has a sweet gentle personality. When he is around cats, he gives them respect, this is another good trait in a dog but Noah does it perfectly. He is playful but very cautious and if he gets swatted he won’t go near the cat again.

The most important test for a dog is food and Noah has an A+; he has no food issues, however, chlorinated city water gives him diarrhea.  He will need to have spring water; his diarrhea was the sole cause of the chlorinated city water. He has a sensitive stomach, and because of this, he cannot have any table scraps unless it is very plain, like plain chicken or crackers. It makes us wonder what other horrible things he had to endure before he was rescued, one can only imagine that he was so hungry that he must have had to eat things that damaged his stomach.

ABOUT THE BOXER BREED: The Boxer characteristics make him a fine family dog; like most dogs, especially young ones under the age of one, you will need to provide enough exercise and training. Boxers like a party and can be rambunctiousness when young. As puppies and young adults, Boxers are animated, playful and often cuckoo in a funny way! They are dogs who love to romp and jump. Middle-aged Boxers typically become more deliberate and dignified and make calm, loyal companions for the rest of their lives.

Exercise needs vary from long daily walks for more sedentary Boxers to vigorous daily romping for high-energy individuals — but not in hot weather, because Boxers are more susceptible to heatstroke than most dog breeds.

Boxers, like most dogs, need consistent leadership. Their heritage, after all, is that of a working dog. However, we suggest that you bring out the party in him and handle him in an upbeat, persuasive way. Boxers are leaders and like their way, but they are also sensitive and proud. They will “shut down” maybe sulk and pout and passively refuse to do anything if you jerk them around.

Most Boxers make vigilant watchdogs — meaning they will bark when they see or see something out of the ordinary. Their guarding and territorial instincts, though, vary a great deal. Most Boxers react to strangers with a joyous “Hi there! Come on in and is often accompanied by enthusiastic jumping and tail-wiggling. Other Boxers are sensible and polite with strangers, neither fawning over them nor threatening them. A few Boxers (typically those from German lines) are more forceful and challenging.

SUMMRY: The perfect home for this sweet gentle guy is love—that is all he needs. He will be happy and give you his whole heart, protect you and run to you when you walk in the door. This rescuer has met a lot of dogs in the 10 years that I have been doing rescue and I have not seen many that have the heart that Noah has—I can count them on one hand. The family that gets Noah will realize very soon that he is a very special dog and his scary beginning has not damaged his trust—we can all learn from a dog like that.