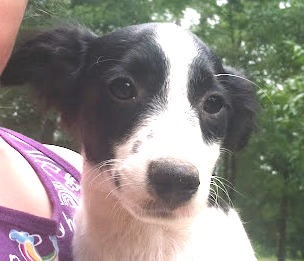 ADOPTED 08-04-12 – Life started out in a dumpster, literally for this little boy. Poor Gus and his siblings were found in a dumpster down south. A very sad start for this little pack of pups to be introduced to a world where they are thrown out with the trash within the first few months of life. A Rescue Dog Village Guardian, Inc. southern foster was alerted to their awful predicament and she pulled them from the depths of the refuse, dusted them off and took them into her home before the trash truck arrived. These little angels could have been lost forever, but here they have a second chance at life. Now these little heart breakers are seeking a forever home, someone to show them there is love in this world, because their first owners obviously did not.

Gus has developed his own personality in the home of the foster. Compared to his siblings he is definitely the outgoing little boy. He is very happy go lucky. You will watch him running around with smiling eyes, genuinely enjoying his second chance at life. Gus really doesn’t have a care in the world, happy is his middle name. He is comfortable in a crate during travel and a crate in the home. He has no food issues and is good with children. His energy activity is considered moderate for a puppy of his breed mix and will need time and attention with his new forever family during his period of adjustment. Rescues generally recommend a two week period (maybe longer for some individual personalities) of quiet home-life to bond with her new forever family, get to know your schedule, to communicate with the family members he can depend on, to learn things to do that are acceptable and gentle guidance for behaviors that need adjustment. As with any puppy, potty training is essential for a successful bond with his new forever family. Be patient while you teach this little guy the rules of your home as with any rescue dog you adopt into your family.

Gus’s perfect home would be just about any. We can chalk it up to a successful socialization staying with his siblings and mother for so long. But we can tell he’s ready to spread his wings and live on his own four paws in a home he can call his own. He’s has grown up with his litter mates. Gus is currently up to date with his shots. Under veterinary care, it was discovered he has “red mange” also known as demodectic mange which is not contagious to humans and generally not transmitted to other dogs. It is understood that all dogs have mites, just as humans do, but this type is passed on from mother to pup during the first few days of life and can be contributed by a suppressed immune response as she is very young. Typically the younger the dog is diagnosed; there is a better chance for them to be cured. Ask your veterinary care professional if you have any questions regarding prognosis or if any treatment is recommended.

We have attached a link for you to review the medical specifics about demodectic mange. Know the facts, click:  http://www.veterinarypartner.com/Content.plx?P=A&S=0&C=0&A=630“>HERE

This charming heart breaking story of her life will touch the lives of many, but only one lucky family will have the chance to adopt Bambi and bring her into a home filled with love and understanding. Apply for adoption today and write “Bambi” on your application.

ABOUT THE PAPILLON BREED

The Papillon is a small, friendly, elegant toy dog with a fine boned structure. They are light and dainty, yet still lively, and is distinguished from other breeds by his beautiful, butterfly-like ears. They are known to be happy and alert little dogs that are not shy or aggressive.

They are also friendly, intelligent dog that is tougher than it looks, and loves outdoor exercise. They are known to be playful, lively, amusing, animated and charming little dog. They are also affectionate, gentle, patient, and proud, they love to cuddle and enjoys a good romp outdoors. They are steady, obedient and are not yappers. Papillion’s can be trained to perform small tricks. Good with cats when they are socialized with them. They are in general easy to train otherwise.

If you allow this dog to become pack leader to humans, it may become very possessive of its owner and resent outsiders. When a dog believes he is pack leader to humans, it is called Small Dog Syndrome, human induced behaviors, where the dog is allowed to believe he owns the house. This can cause a varying degree of behavior problems such as, but not limited to, being, nervous, high-strung, timid, separation anxiety, guarding, growling, snapping, biting, obsessive barking, dog aggression and being untrustworthy with children. These are not Papillion traits, but rather behaviors brought on by the way humans are treating the dog. Since most people who own small dogs, because of their size, unknowingly allow them to run the show, they are not generally recommended for young children. However, if you are your dog’s firm, consistent pack leader, providing rules they must follow and limits to what he is and is not allowed to do, along with daily pack walks, the Papillion can be very trustworthy with children. They will be calm if sufficiently exercised.