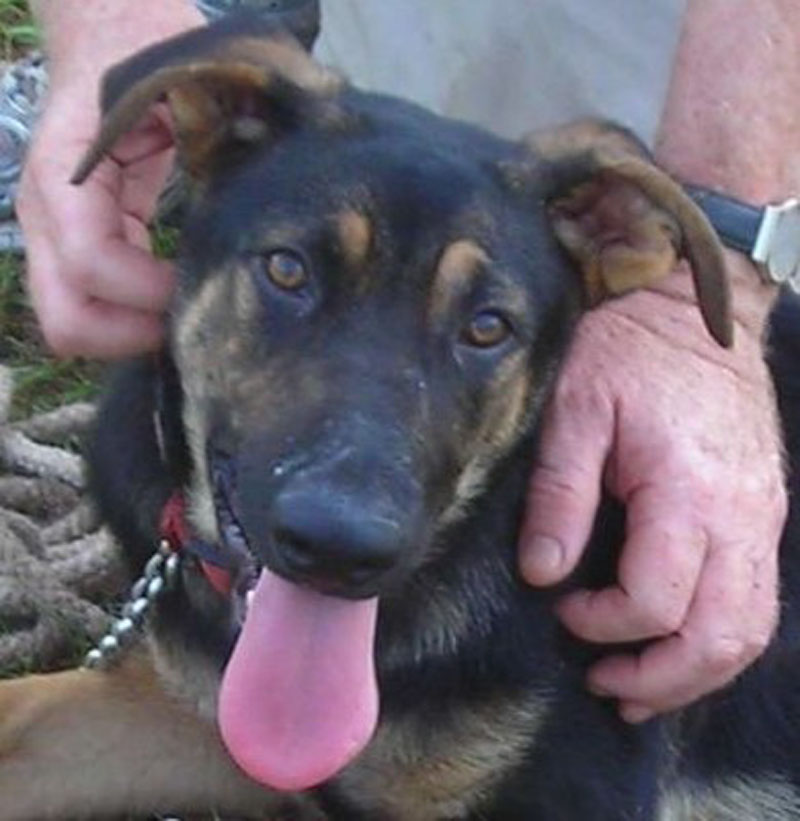 ADOPTED 7/18/10 “Gunny” is a 18-20 week old Germa Shepherd/Doberman Pinscher mix puppy who captures the BEST OF HIS BREEDS! Of all the puppies I’ve met in life or
rescue, none have mesmerized me as much as this one. GUNNY, affectionately named such by our esteemed trainer who loves all our rescued charges as his own, working with each STRAIGHT FROM HIS HEART — who wanted to honor the awesome qualities in this dog by paralleling him to a Gunnery Sargent in the US Marine Corp — the highest ranking enlisted officer, respected by all. While we try not to laugh at his name, it is so fitting actually, especially when one learns of the history behind the Doberman.

The Doberman Pinscher is a breed of relatively recent origin, developed in Germany in the 1860s, presumably by crossing the old shorthaired shepherds, Rottweilers, Greyhounds, Weimaraners, Manchester Terriers and some other mixes. This particular breed was created by Karl Freidrich Lois Dobermann who had the job of collecting taxes in a German village and also operated the dog pound. Apparently he had access to many breeds running the dog pound, and aimed to create a dog that would allow him to protect himself on his often dangerous forays through “bandit-infested” areas. Clearly, the breed is named after its originator (shortened by one n). First recognized by the AKC in 1908, Dobe’s have many talents including tracking, watchdog, guarding, police work, military work, search and rescue, therapy work, competitive obedience and schutzhund. Couple this with the suspected German Shepherd in Gunny’s lineage, and you have the magnificence that is undeniably present in this young pup! Highly intelligent — incredibly easy to train, loyal and loving, gentle and tender, GUNNY is just an amazing pup.

Watching GUNNY around children, even at his young age, is astounding, really. This long-legged beauty is just is so delicate when he’s around children, and contains any kind of exuberance that might knock over a young child. While it is ALWAYS recommended that children and dogs be monitored, no matter the ages, this is a GREAT PUPPY for a family looking for these breeds as he’s just everything one hears is so wonderful about a Dobe and German Shepherd. According to our trainer, “Gunny is a sweet and peaceful pup who is so sharp, keen and alert; a pleasure to work with as he returns everything that is given to him and more.” And, what’s more that his rescue story would have one think that he’s had a lot to overcome, but you’d never know it with GUNNY. Found in a culvert, barely moving because he was in such poor physical shape and had horrendous flea allergies and was likely dehydrated along with starving, this generously compassionate woman took him home, to nurture him to health. When she realized GUNNY needed more care, she immediately thought of our vet, Dr. T. who has an equally huge heart — and he came into our rescue for rehoming. That began our love story with GUNNY!

[av_textblock size=’16’ font_color=” color=”]
Gunny currently tops the scales at 35 pounds, but we believe when he’s full-grown he’ll weigh over 70 pounds. His long legs and big paws and angular and muscular head and body, all suggest that he’s going to be just as gorgeous a full-grown dog. And there’s no way that can be an incorrect assessment. GUNNY has not ONE inkling of aggression in him whatsoever; he’s purity and love, and anyone that meets him feels similar affection and appreciation for this dog! One can’t help but feel devoted to GUNNY given his uber laid-back personality. How a throw-away dog who was rescued from a drainage pipe so lifeless can personify such beautiful and priceless love is why rescuers are so committed to doing what we do. Finding this special young puppy a forever home where he will be cherished as an incredible dog, is the impetus for us to continue spending most of our free time to this worthwhile cause. These dogs deserve all of our attention, and in Rescue Dog Village Guardian, Inc., we are committed to our adopters and our dogs equally. We offer full disclosure and hope to make the best matches possible.